MOORS AND CHRISTIANS FESTIVAL IN ORIHUELA 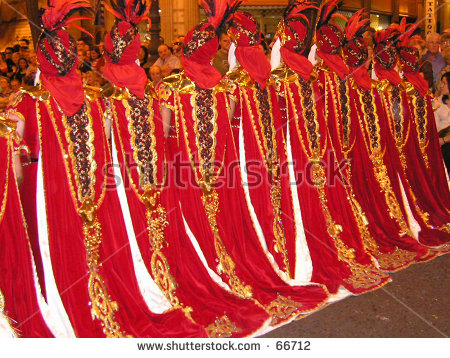 For more than 40 years the town of Orihuela has been celebrating the Moors and Christians festival that commemorates the recon quest of its city from the Saracen domain in the year 1242/1243.

For the next week the streets of Orihuela will boast thousands of colors caused by the beautiful Moors and Christians processions that take over the town, not only enjoyed by those who partake, but also enjoyed by the general public that come to watch.

The programe for the 2017 Moors and Christians parades in Orihuela is presented to you below for those who would like to attend which we highly recommend.

21.00 War between the Moors and Christians (re-enactment with guns).

23:00 Capturing of the Castle in Glorieta Gabriel Miró by the Moors from the Christians.

23.30 Gathering in front of the town hall for the exhibition of the statue Gloriosa Enseña del Oriol.

The most important processions that should not be missed are on Friday the 14th of July; the Moors parade and Saturday the 15th of July; the Christians parade, both starting at around 21:30, running through the central streets of Orihuela, Don't miss out!!